Yesterday, I found this note under my door. Is this a prank, evidence of boredom (komkommertijd bij de Engelse politie?) or does this inquiry relate to when I was attacked in July 2007? 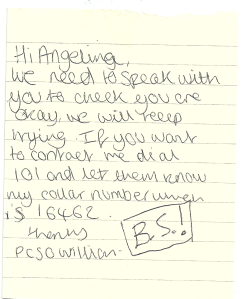 Hint: I added two letters to the note.

I think it is a prank. First of all, the police forces here are stretched thin in many ways and the officers don’t have the time to go around inquiring randomly whether persons are fine. That makes no sense. They stopped investigating crimes against individuals ten years ago because they don’t have the resources. Their standard response when you report a crime – all over the country, not just in your own town – is that they will treat any information you give them as “intelligence” and then they refer you to the city council and your GP. (In practice, they tend to serve mostly as “citizen oppression officers”, unfortunately.)

Also, it just so happens that I stopped by at the police station only a few days ago, with my passport, to inquire about something in relation to an e-mail I’d had from my home country (someone had reported me missing after my e-mails stopped getting through to him) and the officer at the desk said that everything was fine.

Yes, I was attacked by five lads in July 2007, in an incident similar to two others that had just cost the lives of two Britons. (Thankfully, I didn’t know that at the time of the attack; a Briton in my home country later e-mailed me about it.) Local police (Hampshire Police) showed zero interest in what had transpired at the time, which is rather odd in view of the fact that they must have been aware of the other incidents. Or…?

It is hard to imagine them showing up 10 years later!

A while after the attack back then, via the Old Bailey, I got in touch with the widow of one of the other victims, which was probably good for both of us. After all, I merely had a mild concussion – two stones hit my head – and never lost consciousness so I was relatively fine. (I sustained a serious concussion in my teens as a result of two blows to my head during a traffic accident and those knocked me out good. I was carted off by ambulance then, so I knew it wasn’t as bad as that.)

When I found the lads sitting on a wall in front of my home a few days later, I called police in a bit of a panic, but then too, police, well, I guess were completely unaware of the other two incidents that had happened and cost lives? It is the only explanation that makes sense.

So, no, Hampshire Police officers don’t go around inquiring whether people are well, not even after a serious attack, and I am not on a first-name basis with anyone called William either.

So it must be another prank, from anonymous neighborhood folks. I get pranked a lot. Also by police.

(The latter isn’t something I can explain to people in my home country as it appears to be part of the quintessentially British makeup.)

One thought on “Prank, boredom or tardiness?”