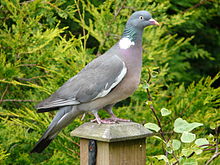 I just ran into an injured wood pigeon (Columba palumbus, also known as “culver” in southeast England, apparently). I suspect that it had been in some kind of altercation as a nearby magpie and crow were upset, though I didn’t see a cat in the area. Maybe it had been in a collision with a car. Or hey, the crow? Crows do occasionally attack pigeons, and also magpies. The magpie was chattering quite loudly so had presumably witnessed something that worried it (which is why I first looked for a cat).

The pigeon had an injured foot (no visible bleeding), so I decided to grab it and take it home so it could get some rest and heal.

But as I am currently in terrible shape, I wasn’t quick and agile enough, though I almost got it. (I did actually touch it, when I tried to towel it.) It flew off then, clearly knowing where it wanted to go to, which was a reassuring change from its behaviour when I spotted it, so I am hoping that it had been in shock, that I helped it snap out of it and that the injury is not too bad and able to heal.

(Also, I  had forgotten that I was wearing a long RED silk scarf at the time. This can alarm birds as they recognize it as the colour of blood, I have learned. With pet birds, you can teach them that not all blood red is actually blood for example by taking a red marker and scribbling on your hands. It may depend on the bird species, obviously.)

I will keep an eye out for the poor thing. Around here, wood pigeons are quite shy. I was amazed to see them scurry around seated people’s feet in Amsterdam a few months ago.

Yes, birds can be in shock.

In Tierra Verde in Florida, I once found a bird sitting in the middle of the road, stunned. I scooped it up and put it in my bike basket, and it stayed there for the duration of my remaining bike ride. Ten minutes or so. But when it was time to examine the bird, it flew off before we got the chance, leaving a few healthy-looking droppings behind.

And Lee Fox, who founded and ran the wild-bird hospital at which I was volunteering at the time, once stopped a guy from killing a pelican, just in time. He’d hit the bird with his car and wanted to put it out of its misery, not realizing that the bird was probably mainly stunned. Lee Fox happened to be passing in her car, stopped and rescued the bird.

Someone just shared this video on LinkedIn and it struck me that, say, the local LibDems have no reason not to take similar action here in town, say, once a month. It would show true leadership.

END_OF_DOCUMENT_TOKEN_TO_BE_REPLACED

I am in the middle of reading “The war on women” by Sue Lloyd-Roberts. The book was finalized without her input after she suddenly passed away in 2015. I wish that I could still contact her.

Because then I would talk with her about her own bias. She sounds convinced that there is a division between the “liberal West and the traditional East”, and it made her slightly blind to what went on in, say, her own country, assessed by the UN as perhaps the most openly misogynistic country in the world. That can probably be explained that she’d been living on the Spanish island of Mallorca since 2003.

I can’t allow myself to be blind to the fact that people in the West who condemn what goes on in other countries but are blind to what goes on in their own culture may be helping their causes less than they think.