Never had any problems with landlords in the Netherlands. Never.

Had three in Florida. The first and the third were fine, but the second one was not and his attorney was rumoured to have mafia ties, I kid you not. But I heard that later. I think it was actually a legal aid lawyer who told me that who I talked with later, long after I’d moved out and his lawyer started pestering me. I’ll spare you the details.

My third landlord was the husband of the person I volunteered with on Saturdays and sometimes Sundays. (He was a builder, built huge places, the way they are in Florida. Nice guy. I think he was in the US Army for a while, and they lived in places like Morocco. ) She stopped by one day – to bring me two birds – and was appalled and suggested I move in to one of their places. They owned a small apartment building that was mostly used by snowbirds (people from for example Canada who take winter vacations in Florida).

Some time later, I moved to Britain.

In Southampton, I knew several landlords. (Only one of them was mine.)

One said that only educated people were decent human beings, and I was too shocked to respond. He called tenants who rang him because the washing machine or heating wasn’t working (properly) “bad tenants”. This was not my own landlord, but someone I met within a business context and was friendly with for a while. Wasn’t actually a bad guy at all, strangely enough.

I also knew one who proudly told me how he had tricked an elderly woman with beginning Alzheimer’s out of her flat, I kid you not.

On another occasion, the same guy was talking with me about a new building he was constructing and then added that it did not have to be very good “as it is only for tenants”.

In Portsmouth, I’ve met two who dump rubbish on other people’s front courts and patios. I caught one red-handed and the other one admitted it.

If I can help make things better for people who come after me who are less strong in some way – okay, except physically as I am getting old and I am feeling it – I will try to do that. And that baffles the hell out of (most) Brits. But that is not my problem.

Once there were two tomato growers. One was called James and the other one Gordon.

Gordon was very disappointed with his tomatoes. Every day, he would go to them and water them and check how much they had grown. Sadly, his tomatoes stayed pitifully small. He would twist them and squeeze them to feel if they were at least ripening a little bit, and accidentally dislodge one from the vine on occasion. It would drop to the ground and rot away.

Gordon felt something had to be done. So he purchased the best fertilizer he could find, with the right amount of potassium and all the other nutrients a tomato could wish for, and placed it in front of his tomatoes. He told them: “If you grow really really well, I will give you this fertilizer as a reward. This shall be your motivation.” It seemed to have no effect on the tomatoes. If anything, they were only growing at an even slower pace.

Gordon became even more dissatisfied with his tomatoes and started withholding water to see if that would convince the tomatoes to grow. But all that happened was that the tomato plants became infested with pests and he had to spray them with pesticides. (“Damn, that stuff is expensive,” Gordon grumbled.) It was too late. The tomato plants turned yellow and started dying. Gordon got very frustrated and kicked at the plants.

James, on the other hand, adored his tomatoes. He loved them! Every day, he went to them, and removed all those little sprouts from the armpits of the tomato plants and enjoyed that typical spicy tomato smell. That way, all the nutrition went to the little tomato fruits, not into making sprouts. He watered them every day, and made sure the quantity of water was just so.

He took care that they got the right amount of nice warm sunshine and on days without sunshine, he would provide artificial sunshine. He also gave them the right amount of fertilizer whenever they needed it. His tomatoes became famous. Everyone admired them. They were so beautiful, so healthy! His tomatoes seemed to be shining with joy. It was almost as if they loved James back and wanted to make him really really happy.

Gordon commented that life just is not fair and that there is nothing you can do about it and also that James had started growing his tomatoes a year earlier, hadn’t he, and that there were no pests at James’s location, and probably also a lot more sunshine. He knew it! Life ain’t fair! And he had never liked James much anyway.

James was not aware of Gordon’s grumblings at all. He found more than enough joy in caring for his tomatoes.

—
The above is from my e-book FCQ. It’s available from Amazon and other retailers.

… and somehow end up with this? And are reminded of Candy Dulfer.

I was looking for something positive as I am surrounded by so much negativity these days, and from so many different groups of local people (almost none of who actually know me even a little bit, I should add).

“If you don’t trust people, you make them untrustworthy.”

Trusting people does not necessarily mean that you are naive, though some people may believe that people who trust others are naive.

If you go through life behaving as if you assume that all or most people are good, you effectively appeal to the good in people.

In principle, such a “naive” attitude probably allows you to be the best you can be independently of who other people are.

It is a much easier and nicer way to live than to go around expecting everyone to be bad people or intending to outsmart you.

From “When Cultures Collide” (Leading Across Cultures) by (Briton) Richard D. Lewis:

Pinkney C Froneberger III who passed away much too soon recommended this book to me, the first time we met, which was at a workshop about cultural differences in Utrecht, the Netherlands in May 2004.

A month later, I moved to Britain, and so much changed for me. In 2010, when I was living in Nightingale Road in Southsea, I still had a long phone conversation with him. (I didn’t tell him why I couldn’t fly over to visit him. I should have because I think he felt let down by me.) It was probably the last time we spoke.

These two Dutch headlines were in one of my e-mails from this morning.

One talks about studies that show (brain activity) that men and women do NOT have different responses with regard to sex.

The other one talks about psychiatric patients being kept in chains in Indonesia.

Both topics are part of my latest course.

However, it can come across like that on the disadvantaged side of exclusive solidarity:

The Neuroscience of Hate: Rebecca Saxe from the Petrie-Flom Center’s channel on Vimeo.

I find this talk very enlightening, also with regard to my own situation as a migrant in the UK. I will have to do some thinking about how I can apply this knowledge.

In connection with this topic, this book by Kathleen Taylor, another neuroscientist, is very enlightening as well: 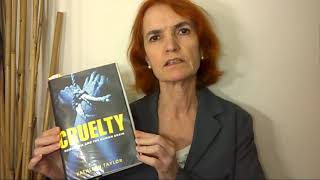 In my latest course, I also talk about stigmas, including the fact that I unsuspectingly became burdened with at least five stigmas after I moved from Amsterdam to England. It’s shocked and hampered me greatly, and it also taught me a lot.

My most embarrassing moments in this respect?

Finding myself wanting to emphasize that I am not eastern European “or something like that”.

I still cringe when I think back to it.

Nobody is immune to the destructive self-perpetuating power of a stigma.

Watch this and notice that one of these TBI patients believed that his family members were out to kill him in the period immediately after his accident:

One of the questions in the course is the following:
Find as many plant-based egg substitutes and (perfect or not) plant-based protein sources as you can find. Here are some responses.

Aquafaba is a good alternative for egg whites:
http://aquafaba.com/

Beans and rice are a great combo.

Buckwheat is a perfect protein source.