Did you watch those videos that I posted, about that South-African woman? Anna Breytenbach. Amazing, eh?

No, that’s not me, but I have observed myself that animals – particularly birds – are far superior at communicating than we are. 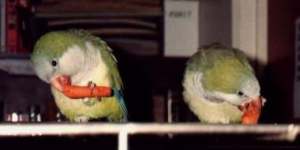 In June 1994, I adopted two feral quaker parrots who had turned up at the bird hospital at which I was volunteering. I still new next to nothing about birds at that point.

They couldn’t be released into the wild as that was against the law.

The photos are from the early days, most of them from in Florida.

My first shock came when they turned out to have caught on to when I was about to go to work in Amsterdam in the afternoon and wanted them back in their huge cage for their own safety.

They anticipated it and voluntarily cooperated with me, by going back from their play corner into their cage as soon as they realized I was probably about to leave the house soon. When I put my shoes or my watch on, I perhaps?

The first time that happened, I was immensely touched.

Always trying to learn more about what might benefit them, I stumbled upon an aloe vera herb drink that was said to be very good for the liver but also in general, for birds.

I’d always felt that one of the two was health-compromised in a way that nobody was aware of. She’d shown a response to a slight drop in temperature shortly after she came to live with me that made no sense. That is what cued me onto that something might be wrong with her underneath her shiny exterior.  (The other one was not able to fly.)

It does not taste very good, that aloe vera stuff. So I asked the other bird – who was nearby – if she could please take a sip because, I said, it might encourage her pal to drink the stuff too and I said that it would really help her pal. (The other bird had taken a tiny sip, not liked the stuff much and walked away.)

To my astonishment, I suddenly noticed that that bird was listening extremely attentively in the background, then very decidedly stepped forward and began drinking the stuff as if her life depended on it.

(She passed away in 2007, by the way.
We – well, my avian vet, with me observing – did a quick necropsy
to find out what her health problem had been, to learn from it,
and that’s when we also discovered she was a female.)

I learned never to make silly jokes about plucking their feathers and putting them in the soup, for instance.

I had no idea how they do what they do any of this.

I also learned not to open postal mail in the presence of my birds because they, as Anna puts it, live in the present. They don’t understand why a letter might be upsetting or cause anger but they can get upset and worried when they see we are upset and worried, or angry. Such a letter usually isn’t really worth a lot of upset and worry. They notice our response and conclude that there is something to worry about or get angry about, for them too.

It took me almost two decades to begin to figure out the enormous capabilities of these birds and, from then on, also of other birds. They do many things that we humans certainly are not capable of, I thought, and I had no idea how they do them.

I have also seen that they have an understanding of other animals beyond ours and compassion for them, even if those other animals are animals that they need to watch out for (predators).

That particular bird species makes huge bird condos with separate areas for different activities and I have read that they offer shelter to other species and sometimes even to predators, provided they leave the chicks alone.

(DEFRA by contrast simply kills these birds whenever it gets the chance.)

It’s later also happened to me that I waved with my hand, beckoned two pigeons to come over, which they got, repeatedly. I thought nothing of it.

Later I thought “How on earth do they know what me beckoning with my hand means? That’s a gesture that humans make, but that pigeons aren’t even able to make so can’t possibly understand.”

Turns out they pick up on the intention, and the images (after all!).

Because then I stumbled into that first video about Anna Breytenbach a few days ago and she essentially describes what I have seen in birds, abilities we have no idea of, and that they have on top of the various other abilities they have that makes ours pale in comparison (vision, hearing etc).

Now I also suddenly understand why dogs almost always jump up when they see me and interact with me. They respond to the image I form in my mind, that goes unnoticed by me, but not by them!

We can do it. We can turn the world around. It’s up to us. All it takes is the decision to do it.

Harder to put into practice than these words suggest.

Or maybe not at all?

The intent alone may be enough provided it is strong enough. As Anna said in the second video, it is about getting out of our own way.