My book titled “Is cruelty cool?” will become available on 31 August.

This book is for people who believe that cruelty gives you edge. But it is not only for them. 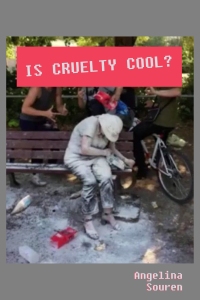 This book is also for all the otherized people in England. The 3million and all the other non-UK citizens, the disabled, the women, the feebleminded, uppity females like me who don’t know their place, the poor, the elderly, many of the educated and of course everyone whose skin is not lily-white (including Priti Patel even though she keeps repeating that she wants to reduce the number of people like me, the low-skilled cheap labour that supposedly forces the UK government to keep wages low and the English poor).

It’s for black people and native-American people in the US and it is for people who are workplace bullies or who used to be workplace bullies and for people who are the target of workplace bullying and community bullying or who have a friend or colleague who is being bullied in the community or at work as well as for some employers. It might be good if a few more English politicians other than Priti Patel would read this too but most of them are likely too busy feeding voters crap. The kind of crap that encourages cruelty…