I have often mentioned the poverty mindset I’ve encountered in the UK and how many people are holding each other back here while genuinely believing that they are helping each other.

Douglas Kruger explains it very well in this video below. Notably his remarks about the poor not having the answers (knowledge) that they need and about how the poor focus on the bottom line while you need to focus on the top line. Notably the latter will hamper people tremendously.

In the 1980s, I bought a book that made me aware of that. It was by an American woman (and I may have read the Dutch translation), but I can’t remember the details. It made me aware of how you need to think and behave – BE – as if you are already at the level that you want to be at. If you’re constantly worrying about money, then that fear is the only thing you will radiate. The insecurity. It is the thing that does not get you hired if you want to get hired.

That is what it taught me.

(I’ve also always tended to focus on what I felt needed to be done or what I needed to do. Write a paper and submit it because I strongly felt that its contents needed to be communicated. Suggest a conference session on a topic that was being overlooked. You just do them, period.)

Rather than buying 10 dirt-cheap things from Primark that will constantly remind you of your lack of finances, shop only the Debenhams and John Lewis discount items or save up for one or two of their pieces of clothing that everyone in your surroundings will be angry with you about. (John Lewis and Debenhams are my favorite British stores. They don’t sell crap, they sell quality that lasts a very long time and that honours and serves you as a client.)

That is one of the things that book taught me.

(Of course, in some settings, what you wear makes no difference, but what you wear can also provide a strong signal to yourself and you have to be aware of that.) 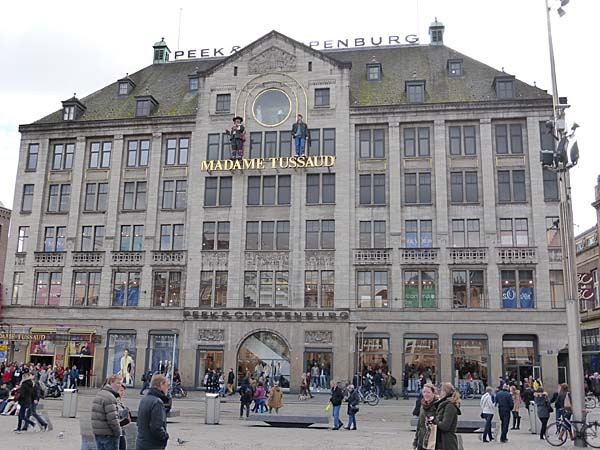 I also started letting businesses know when they had helped me tremendously rather than criticize them when they dissed me. Peek & Cloppenburg at Amsterdam’s Dam Square not only solved an issue with a coat I had bought but also gave me a coupon for a free coffee while I waited while they remedied the problem; it happened years ago but it still makes me feel so good just to think back to that. By contrast, I abandoned the Albert Heyn store at a short distance from where I lived for the one in Amsterdam’s Kinkerstraat.

Though my parents were formally middle-class, I suppose, as my dad had his own business, they had little more than primary school. They knew shit. (Sorry, mom and dad. Please do not take it personally, up there in heaven. I think you know that I don’t mean it in a bad way.) I remember how I felt when my dad showed me something that he had gotten from a local city councillor that he regarded as a major treasure and that was only a list of which expenses he could claim (for me, to support the household). I realized how immensely little my dad knew and at this point, I realize how immensely little I knew (but I was a teenager). That. The knowledge the well-to-do have and pass on to each other. It’s just practical shit, to a large degree.

Here in the UK – besides the utterly bonkers drive to keep up with the Joneses which is likely related to the British class thing (which is NOT just related to education, dear Dutch quality newspaper NRC) – there is also the drive to monitor and chide and ridicule and criticize each other, and this is particularly done to the poor.

I’ve had a comment on Facebook about vegetables I had bought at a supermarket. So someone had been looking into my basket and reported it to the anonymous goegemeente. I was told to shop differently and put it in my freezer. I didn’t have a freezer. End of. In Britain, you can easily waste 80% of your time on this kind of silliness, fighting off nonsense made up by others. It reflects how unfulfilled Brits are. Why else obsess about what strangers do?

I’ve also been chided about sending some of my books to certain people in the hopes of getting a review, by the kind of people who haven’t got a clue about how to run any kind of business (yet are supposed to assess other people’s businesses) and assumed that I had put the books in the wrong column (sold, not bought). And that there, what is that? LIRA? “Those are royalties to do with books I co-produced before I moved to the UK.” “Oh.”

I see soooooooo many local businesses start up and fail because they do not do any marketing. They blindly assume that if you start a business, the money will magically pour in as people will rush to you all by themselves. And, judging by some of my own experiences here, this may well be what they are told by everyone around them including the ones they turn to for advice. In business, the good ones NEVER end up in a low-level job in which they are supposed to advice start-up businesses. Remember that!

Many people here don’t understand that money does not just come flowing in because you want it to come flowing in. You need to spend – that is, be active – in order to generate more money and focus on empowerment and abundance.

Instead most people in the UK are forced to focus on fear and insecurity. It freezes their own possibilities and creativity but what I find most devastating is how they also strangle others and paralyze other people’s minds with that kind of attitude.

(Note: I am not talking about excessive consumerism.)

I decided a long time ago that I was NOT going to let a lack of money hold me back. It means that you have to take risks. Risks can backfire. It’s life! It’s fun! Even when I grumble, yes, when something has backfired.

(Scared of risk? Go back to sleep.)

Okay, it is different when you have a family to take care of. I made choices, a long time ago. (For ambitious women, marriage tends to hold them back. Certainly if you are my age – 60 now – there did not used to be that many men who could “stand” a woman who was at least as successful. It’s always fascinated me how much Amelia Earhart was supported by her husband because it was so so rare. Although her disappearance has also made me wonder if she might have run into the limits of his support, perhaps.)

Anyway, I don’t agree with everything that Douglas Kruger preaches in his videos, but he is a GOOD guy – yes, you can tell – and he tends to make very good points. And I too used to be a member of Toastmasters. So there is that, too.