The more I read about variations in neurological makeup, the more confusing it becomes at times. Turns out that I really had no idea what autism is.

I’d never heard of PDA. I knew next to nothing about Asperger’s.

But reading up a bit on Asperger’s made me wonder what distinguishes it from borderline personality disorder (BPD). (I have some ideas about that but almost no experience. I’ll come back to that.)

Turns out I am not the only one!

Wow. If that is the case… That raises lots of questions. I’d already heard – and I understand why – that people with Asperger’s are sometimes mistaken for people with a narcissistic personality disorder (NPD) with or without psychopathy or sociopathy. Wow.

And I can imagine that any condition with a Jekyll & Hyde aspect – which apparently Asperger’s can have – can make people with such conditions wonder if they are bipolar. Bipolar disorder is probably not well understood either (certainly by people who don’t have it or don’t have anyone with it in their close surroundings?). Wow.

What I have picked up after admittedly only reading a little bit is that autistic people can display physical symptoms and they do not occur in the other conditions, to my knowledge. Things like clumsiness, “flapping of hands” and avoidance of eye contact. BPD does not have that. Neither does NPD. But I also get the impression that not all autistic people have these physical manifestations.

When you read a lot about these things, and this may particularly hold for the spouses of people with some of these conditions (or in general, people who’ve endured years of abuse/gaslighting and isolation), you can find yourself mentally checking if any of it might apply to yourself… That too can be confusing, I bet.

For a moment, it made me wonder what I thought I was doing when I wrote the book that I wrote some time ago. Luckily, I do have the answer to that question. (Phew.)

It helps tremendously if you can VISUALIZE brain-related conditions for which other people tend to assign blame and make remarks such as that one should be able to grow out of it, admit it and seek help for it, and what have you.

That explains the usual Catch-22 aspects of the condition.

This could also mean that/why people with NPD rely on notably empaths to “create” empathy for them. Symbiosis.

(People with NPD, by the way, lack emotional empathy, not cognitive empathy, apparently, according to a 2010 paper from the same research group.)

So, yes, the brains of people with NPD are wired differently. They did not ask for this, so stop blaming them. Look for what is good in them, and embrace that instead.

They’re like, hey, albinos. Or hey, people who go grey prematurely. Not their fault.

They’re like giraffes that people insist are, say, antelopes.

Or, like I wrote before, table lamps of which we demand that they change themselves into coffee makers.

Let go of it… All the frustration etc. It’s futile.

They are right. They are special. It’s part of the neurodiversity we have on the planet. (The brain is a miraculous thing!) 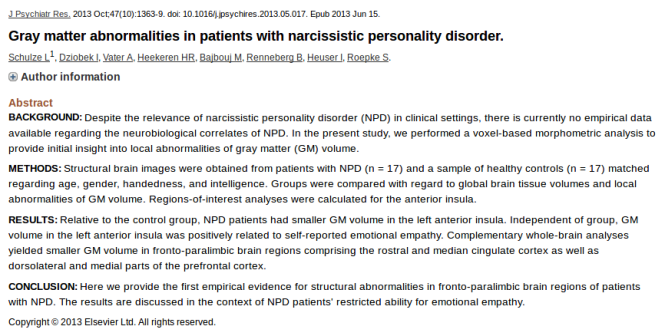 Now I am done waffling about narcissists in a rather chaotic manner. END_OF_DOCUMENT_TOKEN_TO_BE_REPLACED