I don’t know if you are making one of those lists with good intentions for the new year or are entertaining wishes for your Christmas presents, but I hope they’ll all come true.

This morning, I reminded myself that I’ve picked up all sorts of habits over the years, while I moved through various cultures. Mine, for example, does not have a Christmas presents tradition, but you know what? I’d completely forgotten.

[The Dutch do celebrate Christmas, but they give each other presents on St Nicholas D

ay –  Sinterklaas – at the beginning of December. As Dutch mobile phone provider Telfort gave me free calls at Sinterklaas, I know that the tradition is still going strong in the Netherlands, complete with the soot-faced chimney sweeps, and their hand-held short natural-materials brush called “roe” and their chimney sweep’s beret.

Today, I received a Christmas parcel from the States. I’ll open it on the evening of the 24th, because I think that’s what I am supposed to do.

It’s gonna be my 15th Christmas in Britain and my 10th in Portsmouth. Same for New Year’s Eve. For the coming year, I have lots of wishes for myself, but I am keeping them to myself.

For the world, I have lots of wishes too, but it feels grandiose to say that. It is not my place to dictate for other people what they should wish (though I can fantasize!). I guess that in reality, those wishes represent what I want for myself to some degree. 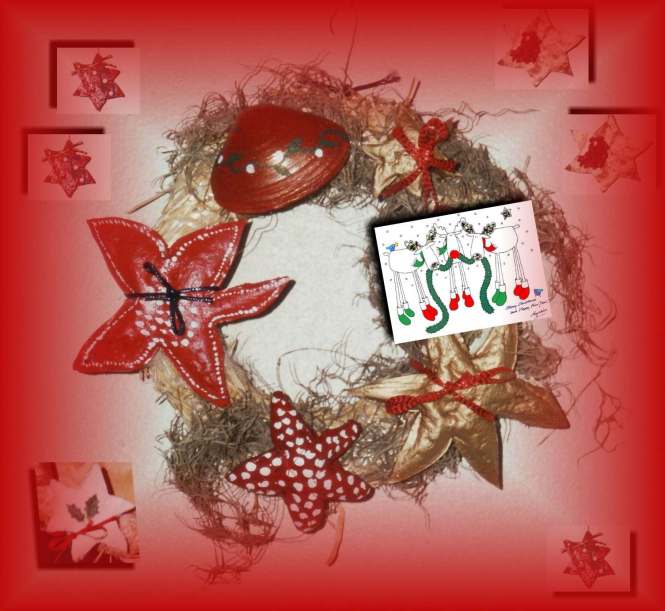 The above collage contains a photo of a Christmas wreath I decorated while I was living in Florida in the mid 1990s, with dough-based ornaments and sea shells that I painted and Spanish moss, crops of photos of some of the other ornaments I made back then, and a 2009 Christmas card that I scanned and pasted into the image. Then I added a red mist focus.

Oh, by the way, I saw lots of pale salmon-coloured starfish washing up at Southsea, two or three days ago. Amazing! Brought back memories from my high-school biology class. There was a fierce storm with high waves, and lots of seagulls riding them, feasting on various goodies.

Sinterklaas! Tomorrow! And today is pakjesavond, for those who don’t have the southeastern Dutch tradition that I grew up with. I never knew pakjesavond. As a child, I would come downstairs to breakfast on 6 December and find the table covered with gifts and goodies, and the chairs too.

Unless you’ve been living on Mars, you likely are aware of the hot debate surrounding the Netherlands’ Black Petes.

(Thank you, Independent, for the quotation marks around ‘racist’ in that headline.)